I chose to focus on Dawnland Voices because of its focus on archiving and presenting New England indigenous writing that includes writing from members of the Penobscot Indian Nation, a tribe whose input is crucial to a project I’m working on that focuses on the Penobscot River. Linked to and expanding on a print anthology published in 2014, dawnlandvoices.org currently houses both a literary magazine showcasing contemporary indigenous writing, and an emergent (i.e. still in process, or intended to be still in process) digital archive that was/is assembled as a collaborative effort between tribal authors, tribal collections, and scholars/students. The book’s editor and one of the collaborators on the digital archive, Siobhan Senier, describes the project’s impetus, with its origins in a lack of digitized indigenous writing:

We wanted a living document—one that could expand to include some of the vibrant pieces we could not fit in the book, one that could be revised and reshaped according to ongoing community conversation. And we wanted to keep presenting historic materials alongside new (in this case born-digital) texts, the better to highlight the long history of Indigenous writing in this region.

The website itself foregrounds the literary magazine; this is where you land via the primary domain name. To find the digital archive, you either need to notice the small link in the header that reads “Indigenous New England Digital Collections,” or navigate to the “About” page, which explains and links to the site’s two components. This right away suggests a focus on the project of presenting contemporary voices, and locates the archive as a site for a more limited audience, one that knows what it’s looking for. The site makes its partners and funding explicit, important for a project that intends to decolonize the idea of the archive: it’s key to show potential audiences, both indigenous and non-indigenous, that appropriate collaborative channels have been followed, and to recognize the labor of the contributors. There is information about how to get involved in the project, underscoring the set intention that it would grow and function as a true community-based and -generated resource.

Ultimately, exploring the archive, you get the sense that it hasn’t managed to expand beyond its pilot phase. Senier writes about this phase, which was supported by a grant from the NEH that enabled the editors to work with three representative partner collections, one at a tribal museum, one at a tribal office, and a cluster of private collections belonging to four elder tribal members who have gathered themselves under the title “Indigenous Resources Collaborative.” After this grant was spent, there seems to have been little activity. What the site presents is therefore a framework for digitizing tribal archival materials, and representative samples (currently 189 items), along with a number of simple, straightforward ways of exploring these materials: by item, by collection (there are currently 3 collections), by nation, or on a map. The map was created using Google Maps, and the website looks like a WordPress site, although there is no information about the technology used to build the site other than a link to the company that designed it. The pages for each item in the collection contain useful basic information: contributor, citation, a link to the document itself, an embed code, a geolocation, a link to the collection(s) to which it belongs.

Key concerns of a project like this include the ongoing discussion around digital repatriation, a term that at its best refers to efforts made by large traditional/colonial archives to increase tribal access to tribal items in their collections that cannot safely be physically repatriated to the tribe in tandem with ongoing efforts towards physical repatriation and collaboration with tribes on stewarding their own heritage. At its worst, it is a kind of coverup term that allows an institution to say it’s participating in repatriation efforts and complying with NAGPRA.

The site’s seemingly indefinitely arrested pilot state also raises questions around whether there might be a mismatch between the project’s intent and the needs/desires of its target audience. Because this project would need to rely on contributions from an expanded network of tribal collaborators in order to move beyond its pilot state, this is a more pressing issue than with an archival project with clearly-defined curators on the one hand and audience on the other, that doesn’t rely on this kind of back-and-forth (that doesn’t position itself as “emergent”). Senier notes the importance of social media for tribal members and institutions, an observation my personal experience can anecdotally corroborate.

Facebook is a proprietary, and notoriously problematic platform, especially on the issue of intellectual property. And yet it has made room, at least for now, for a kind of fugitive curation that, albeit fragile and fugitive, raises the question of whether such curation should be “institutional” at all.

Thus, in its present state, the site is actually an ideal kind of case study or model for creating indigenous archives. Due to lack of long-term resources and possibly lack of interest in the product, it’s not fleshed out; but the skeleton might be productively be built on. It’s at least a good place to start. 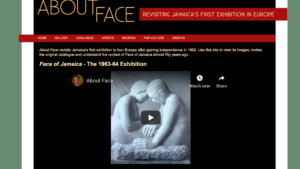 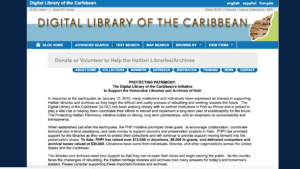 Screenshot of the home page for the Protecting Haitian Patrimony Project at the Digital Library of the Caribbean (http://dloc.com/dloc1/haitianlibhelp)

The Digital Library of the Caribbean’s (dLOC) past projects have included the Protecting Haitian Patrimony Initiative (PHP) (2010) and About Face: Revisiting Jamaica’s First Exhibition in Europe (2012). PHP supports at-risk Haitian libraries and archives in archival recovery and preservation post-earthquake in January 2010. About Face, an online exhibition curated by art historians Petrine Archer and Claudia Hucke presents digitized original content from Face of Jamaica, an art exhibit that toured Europe from 1963-64 and was never brought to Jamaica.

These demonstrate the dLOC’s mission in-practice: to provide researchers “greater access” to digitized Caribbean content materials and advance Caribbean studies through a “cooperative digital project.” Founded in 2002 by nine institutions either in the Caribbean or with prominent Caribbean Studies departments, libraries, and archives, the dLOC now hosts open access to 6,000 titles and 675,000 digitized images from forty-seven partner institutions. Featuring several “topical collections,” materials are organized by format, thematic groups, special collections, and exhibits. The project is powered by SobekCM, a software engine which offers free training and software download.

The dLOC’s outreach efforts include K-12 teacher training and lesson plans, digitization toolkits for all partners and yearly conferences. User-friendly search tools include an interactive map where materials can be found by region and keyword searches. Given these search tools, the project seems primarily intended for researchers both familiar with the Caribbean’s culture, history, and people and some sense of research interests/goals.

All lesson plans, site software, and digitization training at dLOC are freely downloadable to users, perhaps staging dLOC as a model for future collaborative digital projects. dLOC’s cooperative approach and commitment to sustainable digital access and recovery support collections that might otherwise exist in isolation or struggle to obtain funding for digital projects. This isolation is in part due to the Caribbean being understudied in academe, stigmatizations that archipelagoes lack culture/history, and “fragmentation” of Caribbean nations and identities (mirroring that of the internet, as per Kelly Baker Josephs).

With the word “collective” in the project title, the Black Press Research Collective (BPRC) is a collection of people, rather than artifacts. The five people listed on the about page represent a range of humanities and social studies disciplines: African-American history, communications, education, English, and history. An assistant professor of history, Kim Gallon is the project’s founder and director, and presumably the other co-founder referenced on the welcome page is Moira Hinderer, who was a project manager and instructor at the Johns Hopkins Center for Africana Studies during Gallon’s visiting appointment there (and is listed second on the who we are page).

END_OF_DOCUMENT_TOKEN_TO_BE_REPLACED

Enter your search term and click Search to find an item in the CUNY catalog.

Need help with the Commons? Visit our
help page Send us a message

Built with WordPress Protected by Akismet Powered by CUNY